The very first OpenStack PTG (Project Teams Gathering) in Atlanta has now come and gone. I have to admit, I was somewhat skeptical about whether splitting the design summit and the main marketing/user summit was a good idea. I have seen these kinds of splits happen in other open source communities with disastrous results. However, at least from the perspective of pure design effectiveness I have to concede that Atlanta PTG was an enormous success. We will have to see what kind of impact this split has on the Boston Summit “Forum” in May, whether we will have enough critical mass to have a meaningful marketing and end user convention.

From a experienced developer’s perspective, the Atlanta PTG was a success. The location was somewhat difficult, not because it wasn’t a nice hotel, but because there was not any grocery, shopping or restaurants close. Because of that, I’m not sure they achieved the goal of holding the event at a lower cost to the developer. I can imagine that someone attending might feel lost if they are just getting started and looking for some context or are not yet technical or wanting to contribute. There were no keynotes or getting started sessions. The assumption was that everyone there was ready to spend the week working on defining exactly what would be delivered in the Pike release of OpenStack. It actually reminded me of the earlier summits or of UDS/Linaro connect sprints where the marketing hype was very limited and the focus was on teams working together. All in all, I’d say it was a very good first effort.

The PTG was also scheduled well, at least for me. I was able to divide the week up into the two projects that I will be spending the most time in for the Pike release cycle. I spent the first two days of the PTG in Kolla. I spent the rest of the PTG with the Ironic team. The cross project meetings the first part of the week at PTG were also very productive. It was great to be able to go across the hall to another ballroom to grab someone out of the Neutron or Nova teams to ask them a question.

I was trying to save money and flew in very early Monday morning. In retrospect, that was not a wise move. I affirmed that I really do not enjoy driving to the airport at 3:00am, and it made the day very long. I would have been much better equipped to have meaningful discussions if I had made the trip a day or more in advance. It also put me in a sleep-time deficit for the week that was difficult to make up. Lesson learned.

The Kolla team started off the first of two days discussing repositories, which I missed due to traveling that morning. I arrived in the second half of the documentation planning. I found this session to be a good gentle warm-up to the deeper topics the rest of the day, especially for someone that had been up since 2:45am and just got off a train from the airport, luggage in tow. The Kolla team was well organized heading into the PTG, with good description and back-story for the session topics. For me the best design sessions always seem to happen in the halls between sessions, at lunch, or at impromptu break-out sessions with a few developers. This was the case for working out the details for supporting non-x86 hardware architecture for Kolla. The Linaro team has been actively helping OpenStack stay architecture platform independent. The first day of Kolla discussions concluded with a team dinner at the Atlanta Hard Rock Cafe. I really wanted to go, but I was so tired that I knew it would be better for me to just go back to the hotel and call it a day.

Tuesday’s Kolla sessions started off with discussions on container distros and image refactoring, topics that I found especially useful and hopefully made meaningful contributions to. There was a brief discussion about the multi-arch support, but it was basically an acknowledgement that, ok-you-all-have-that-covered, let-us-know-how-to-help kind of thing. There were really good brainstorming and framing discussions on brownfield migration and how to test that with multi-node gate testing.

I was able to introduce myself to most all of the cores and the PTL over the course of the day. That is one of the great things about these meetups, is to be able to meet and know that person that you interact with in IRC. The other great thing that happens is that I get to meet IBMers that I have worked with for years and never met in person. Tuesday, I met and had lunch with the PowerVC team and others from IBM.

Wednesday started the Ironic team discussions and after introductions we dove right into a Pike priorities overview. Driver composition came up and the need to maybe auto generate a capabilities table in the driver documentation. The discussion moved fast Wednesday and covered a lot of ground. Python 3 compatibility is a common theme and was discussed, as well as a session on CI testing. I was attending this with Mike Turek, also on my team in the IBM Linux Technology Center. It was his first OpenStack event, but you wouldn’t have known. He jumped right in and volunteered to be the scribe for all the etherpad discussions and did a great job. 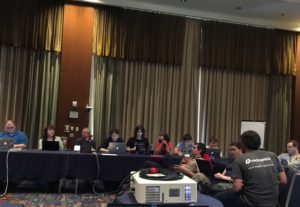 A large part of Thursday discussions centered on future work for Pike and much deeper design discussions. As usual for multi-day design summits, my attention span and processing ability were diminishing. The day concluded with the team dinner, which unfortunately, Mike and I decided to not attend. It was far away from the downtown area and not easily accessible from public transportation. Since I was on a very limited budget for this trip, I decided not to get a cab or worse, rent a car. I didn’t find out until too late or I would have arranged to get a ride with someone else. But, on the upside, I was invited by Miguel Lavalle to crash the Neutron team dinner, so Mike and I went and had a great time and good food.

Friday was a short day for me as I was leaving early to catch a flight back home. It was an Ironic working session that started with a reflection discussion. It was a usual what worked, what didn’t session, and the usual topics came up, how to onboard more developers and encourage core mentoring. It was brought up the OpenStack is going through a re-adjustment period, I like to think of it as a right-sizing from the massive over-hyped beginnings of the project. Core reviewer mentoring is going to be a big concern for several projects where they are down to just a few from debs being moved off to other projects. About that time, I gave in to the growing brain mush from the design week and headed to the airport. 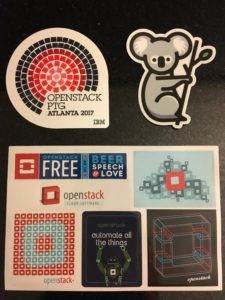 All in all, I think it was a success. I look forward to Boston and seeing what will need to be adjusted there to continue forward with the split summits. Stay tuned.